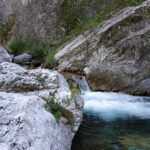 The Urlias or Orlias is the ancient river of Pieria, Elikonas. The river was named “Urlias” after the roar of the water.The Orlia stream crosses the slope of Mount Olympus and forms waterfalls and natural pools. Two of these waterfalls with their pools are easily accessible from the village of Dion.

In the river Helicon the Maenads tried to cleanse themselves from the blood of Orpheus, after killing him at Dion. The river god, refusing to purify them, disappears under the ground and comes to the surface further away with the name Vafyras. The river current, after having gone up to seventy-five stages, then disappears under the earth. Thus, with a break of about twenty-two stages, the water rises to the surface again, and now the river, instead of Elikonas, is called Vafiras and goes down to the sea as a floating river. The inhabitants of Dios say that in the beginning the river flowed all the way to the surface of the earth. But they say that the women who killed Orpheus wanted to wash their hands of the blood in its waters, and that is why the river was submerged in the earth, so that it would not offer its waters for purification from murders.

The name of the river Vafyra is etymologically related to “βάφω” or “to colour by immersing in liquid”, concepts that refer to the mythological cause of the disappearance of the river under the ground . The river personified as a young man, is exhibited in the museum of Dion. On his head there are traces of a crown that had the symbolic meaning of the walls of Dion. A statue of Artemis Vafyria was discovered at the mouth of the river.

In the alley before we reach the first waterfall, there is a rock with a red heart painted on it. If we follow the path in three minutes we reach the second waterfall. The second waterfall is taller and more imposing and creates a larger and deeper lake. It is also called the beginners’ gorge and it is a gorge for everyone, easy, touristic, popular. The technical training required to cross it is low compared to other gorges. But let’s not forget that Orlias has one of the most entertaining, but at the same time big, steep and vertical slides of 9 meters high, capable of raising the adrenaline up to the sky, this slide is also a dive, of course there is also the possibility of descending with a rope for those whose limits stop there!

A waterfall of 27 meters high that any beginner will appreciate the effort and will love canyoning. Swimming, climbing in small and big waterfalls, diving of small and big heights, water slides, descents with resistances and walking on wet ground. Orlias is an open gorge with lush vegetation, crystal clear waters and lots of sunshine. It has beautiful slides, some steeper and some gentler and several jumps. It also has plenty of sunny spots for breaks, games, swimming and diving.

The second part of Orlias has 12 waterfalls with the largest at 27 meters, the duration of the descent is on average 3 hours, the safety is very good, while during the hike through the waters, there are no particularly slippery spots that can cause an accident